Stockholm, Swedish pronunciation: [²stɔkː(h)ɔlm], is the capital of Sweden and the most populous urban area in the Nordic countries. The city stretches across fourteen islands where Lake Mälaren flows into the Baltic Sea. Outside the city to the east, and along the coast, is the island chain of the Stockholm archipelago.

The area has been settled since the Stone Age, in the 6th millennium BC, and was founded as a city in 1252 by Swedish statesman Birger Jarl. It is also the county seat of Stockholm County.

Stockholm is the cultural, media, political, and economic centre of Sweden and the main centre for corporate headquarters in the Nordic region. You can read more about Stockholm at Lonely Planet, Visit Stockholm and Wikipedia.

In Sweden the power sockets are of type F. The standard voltage is 230 V and the standard frequency is 50 Hz.

Stockholm enjoys some of the cleanest tap water in the world. You can enjoy it straight from the tap.

The Swedish Krona is the currency of Sweden.

Many businesses in Stockholm are now cash-free and accept payment by credit or debit card only.

Bargaining is extremely unusual in Sweden.

Bars & Restaurants: A service fee is included in the bill. Tipping isn't expected but a 10-15% tip for excellent service is becoming more common.

Information will follow closer to the meeting.
For early information regarding visas please contact the local Swedish Consulate or the Embassy in your home country.

List of recommended hotels will be announced closer to the meeting.

Please be aware that smoking is prohibited in places indoors that the public have access to, such as health care facilities, restaurants and bars, hotels and other public areas.

Smoking is also banned in some outdoor areas that the public have access to. The prohibition includes:

5-9 October in Stockholm. With Technical meetings starting on the 28 september.

How to get here

Stockholm Waterfront Congress Centre is located between the Stockholm Central Station and the City Hall.

Be one of our sponsors 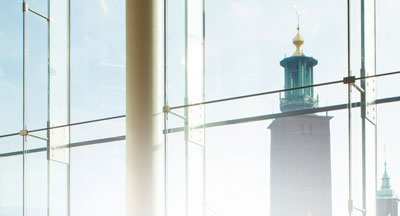 An international arena for new contacts and partnerships, in wish Swedish companies can be seen and operate.